From the 21st to the 23rd of August 2015, Prof. Francesco Zannini attended, as official guest, together with Dr. Ataul Wasih Tariq, the Imam of the Ahmadiyya Community in Bologna, to the International Yearly Meeting (49th Jalsa Salana) of the Ahmadiyya in the Hampshire farm known as “Hadeeqatul Mahdi”, United Kingdom. It was a gathering of about 30,000 Ahmadi Muslims, where Prof. Zannini had several occasions for dialogue both at the intellectual and the religious level, with people of good will with whom we can work to build a world of peace and understanding.
Finally, Prof. Zannini was received by the world leader of the Ahmadiyya, Khalifatul Masih V, Mirza Masroor Ahmad, with whom he had an enriching exchange on interreligious dialogue, on ways of understanding each other and on various approaches to the Qur’an. 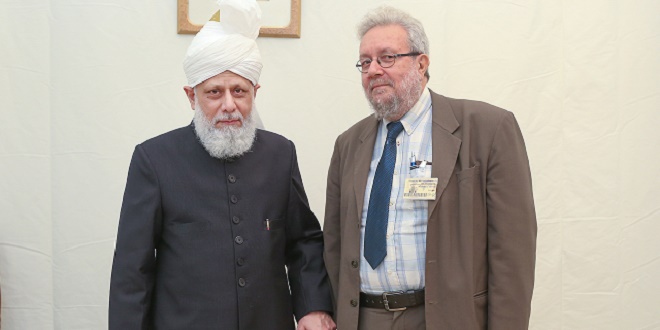